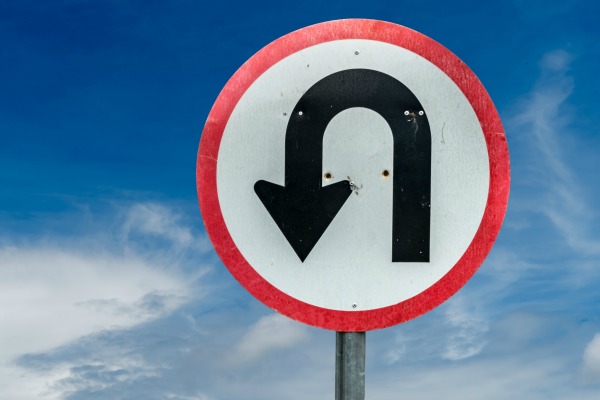 § 4153. Limitations on turning around.
(a) No vehicle shall be turned so as to proceed in the opposite direction upon any curve, or upon the approach to or near the crest of a grade, where such vehicle cannot be seen by the driver of any other vehicle approaching from either direction within 500 feet.
(b) The driver of any vehicle shall not turn such vehicle so as to proceed in the opposite direction unless such movement can be made in safety and without interfering with other traffic.

There are fewer restrictions on U-TURNS than most vehicle operators would presume. In particular, many motorists assume a SOLID YELLOW LINE prohibits a U’EE. That is false assumption. If there is a minimum 500 feet line of sight from opposite direction traffic and such movement can be made in safety, then the SOLID YELLOW LINE does not prohibit such a movement.

QUESTION: Is it legal to move onto the right shoulder in order to turn your vehicle so as to proceed in the opposite direction – see picture below?

ANSWER: YES, there is no such restriction in Delaware Law. Reality – at times moving onto the right shoulder is the safest place to perform a U’EE due to lack of room to make such a maneuver. This lack of room could create the necessity to make a 3-point turn around which requires more time to perform than the U’EE.

SIGNAGE: There are locations when a “NO U-TURN” sign is present. Obviously, turning to proceed in the opposite direction is illegal in these locations.