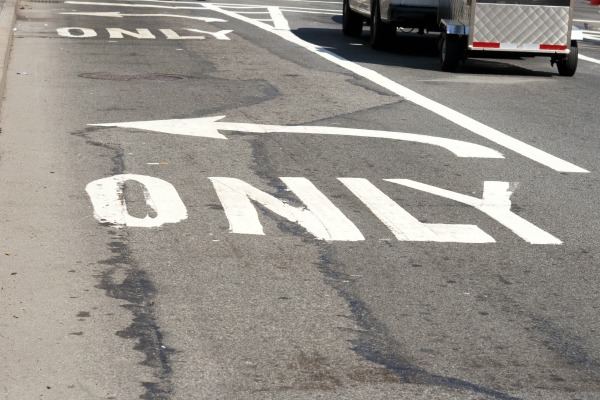 The following is “The D Team” “Smart Defense” PLAIN TALK interpretation of the Delaware Turning Law (TITLE 21 § 4152). This Delaware Law is extremely confusing and quite possibly no longer completely relevant in some identified procedures due to intersection modernization designs. It is also important to understand that the phrases “whenever practicable” and/or “as nearly as practicable” are both used in this law which adds further interpretation confusion.

This is the original left-turn procedure and the one that should need no detailed explanation – even to beginning drivers.

Two-lanes to two-lanes left-turns
Another easy one – when marked!

The YELLOW DASHED GUIDE LINES (opposite direction traffic) are painted on the road surface to help motorists to maintain the proper turning path.

TITLE 21
Motor Vehicles
Operation and Equipment
CHAPTER 41. RULES OF THE ROAD
Subchapter VI. Turning and Starting and Signals on Stopping and Turning

§ 4152. Required position and method of turning at intersections.

“The D Team” has arrived at the conclusion that the turning law identified above (§ 4152) was written prior to the existence of multiple left-turn lanes and or multiple lane options upon completing the left-turn (picture above). This law also contains the term “practicable” on multiple occasions, which further adds to the confusion. Furthermore, since business entrances are sometimes located on the right shortly after the left-turn is completed, a left-turning motorist may choose to bypass the closest lane (#1) and move directly into the far right lane (#2).

“The D Team” “Smart Defense” suggestion – when making turns (left or right) go from one lane to the other as directly as possible without crossing lane lines if “practicable”. Once you have completed your turn, you can change to another lane.

THE BOTTON LINE: Be careful! Confusion can sometimes be the norm. If another motorist does something you believe to be wrong – it may be you who are confused.

Is It Ever Legal To Run A Red Light In Delaware?