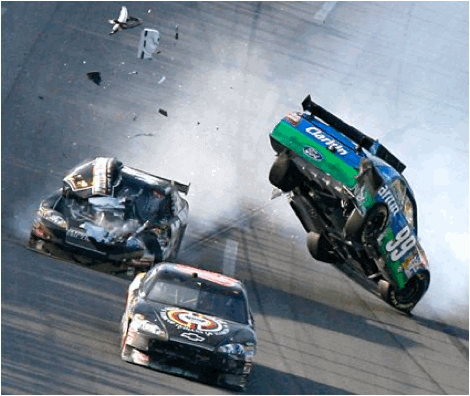 THE FORCE IS NOT YOUR FRIEND: “Smart-Defense” by “The D Team” believes all occupants of a motor vehicle in motion should be aware of the consequences of violating “NATURE’S LAW” herein known as “THE FORCE” — an object in motion (HUMAN MISSILE) remains in motion until “THE SECOND CRASH”!

View a real life “SECOND CRASH” scenario — yellow and black arrow in picture #1-2 below. The “FIRST CRASH” occurred when two vehicles collided. The “SECOND CRASH” happened when the unbuckled driver continued in motion and unfortunately smashed into the front windshield.[/vc_column_text]

There is no question THE FORCE is a more formidable opponent than Man’s law (POLICE OFFICER).

Okay, maybe this POLICE OFFICER is formidable, but he does not possess the power of THE FORCE – see picture #1-4 directly below.

PRINCIPLES OF THE FORCE

1. THE FORCE is on every spot, on every road, every second of every day.

2. THE FORCE does not care who you are.

3. THE FORCE does not allow you to plea bargain.

4. Please remember — THE FORCE is not your friend and it will be with you throughout your entire driving experience.

THE POWER OF THE FORCE